Back in the day, when your parents or grandparents wanted to buy a house, they saved up until they had enough to make a 20% down payment and applied for a mortgage at their local bank or savings and loan. If someone in the family was seriously injured or ill and the medical bills exceeded the limits of their health insurance, they made arrangements to pay off the balance, often sacrificing luxuries and even necessities until the debt was paid. If they had one or two credit cards, they paid the statement balances in full each month. And major purchases, like a boat or a car, were put on hold until they could pay cash.

Those days are gone. Cash is a quaint relic of the past, and credit is almost ridiculously easy to obtain and use. According to Bloomberg, U.S. credit card debt at the end of 2018 totaled an astonishing $870 billion; and for decades the federal government has piled up debt to the tune of trillions of dollars.

Credit is no new kid on the block, but it’s being used today in ways never contemplated by the first banks to peddle plastic to eager consumers. Those once traditional banks have undergone significant transformations and in recent years have been joined by an array of alternative lenders that have markedly altered the face of the financial services sector.

Both traditional and alternative lenders face a host of exposures, particularly in the professional liability arena. From honest mistakes to fraud, embezzlement, and misappropriation, financial services providers are vulnerable to claims and lawsuits that can cost millions and drive smaller firms out of business.

That’s the bad news. The good news is that resources exist that can deliver a broad array of coverages for financial services providers. One such resource is managing general underwriter Business Risk Partners (BRP), which recently brought on Vincent Cisternino to head its financial services practice.

Cisternino identifies three key trends that are transforming the space and explains how those trends are creating new professional liability exposures. 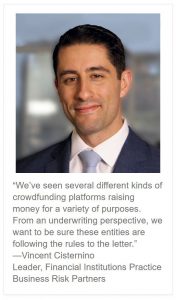 The first trend he points to is the evolving regulatory environment. “Two key pieces of legislation have been affecting the market over the last ten years since the financial crisis,” he says. “The first is (the) Dodd-Frank (Act), which allowed for the creation of the Consumer Financial Protection Bureau (CFPB). The CFPB is supposed to be an independent agency funded by the Federal Reserve, but the directors are appointed by the president, which tends to politicize the process,” Cisternino explains. “Under the previous administration the CFPB had a fairly wide mandate, and the current administration has diluted its influence.”

Another key piece of legislation is the JOBS Act, which is intended to make it easier for small businesses to raise capital. “This allowed for a more formal structure for crowd funding,” Cisternino says. “In 2015 the SEC pushed for regulation of crowd funding, which created a framework for small businesses to go through approved intermediaries to raise money. Pre-viously you had to sell securities to an accredited investor, an individual or business who is allowed to deal in securities that may not be registered with financial authorities. Now these sales can be made to nonaccredited investors, who aren’t required to have the same level of income or perceived financial sophistication.

“We’ve seen several different kinds of crowd funding platforms raising money for a variety of purposes,” Cisternino observes. “From an underwriting perspective, we want to be sure these entities are following the rules to the letter. As with any emerging concept, people jump in without having the background or skills to perform services at a high level.”

The second trend Cisternino identifies is the impact of technology advances on financial services providers. To some extent this encompasses crowd funding, which is conducted online, but in the financial services sector today the big buzz is about cryptocurrency. Bitcoin has become a household name, and in the wake of its resounding success have come a number of competitors with names like Ethereum, LifeCoin, and Ontology.

“Over the last six months we’ve seen the excitement about cryptocurrency die down somewhat,” Cisternino comments. “That said, it’s still a multi-billion-dollar component of the financial services sector. As underwriters, we recognize that we need to look first at the cryptocurrency itself and then at the underlying technology.” The cryptocurrency market is largely unregulated, he comments, and some investors lack the knowledge and experience to operate successfully in this space. What’s more, “In some private equity firms and hedge funds, the investment directive is driven by one individual, and this creates what’s known as the ‘key man risk,’ where no one else knows where the money is.” In the crytptocurrency space the key man risk can be even greater, as demonstrated in the QuadrigaCX incident where customers were unable to access $190 million after the death of the CEO,who was the sole holder of the password.

“We’re seeing a wide array of specialized lenders serving specific industries,” Cisternino remarks. “Traditionally these entities would borrow from a bank, but because of more restrictive credit requirements at the bank, they’re looking for other sources of capital. Often they’ll pay more interest for the expediency of dealing with a lender that understands their particular industry. One example is a lender that was set up to help insurance agencies acquire books of business.”

Lisa Doherty, chief executive officer and president of BRP, explains that her firm had always offered miscellaneous professional liability coverage for consultants, real estate agents, home inspectors, and other service providers. “We had written some mortgage broker business but were not deeply involved in the lender market,” she says. “When we did make a foray into the financial institutions market, we started with community banks after the recession that began in 2008. From there we expanded into broker/dealers, and we saw a need for professional liability coverage for smaller financial institutions that fell into the miscellaneous category.”

About a year ago, BRP expanded its financial institutions portfolio by introducing a miscellaneous professional liability policy for some 80 classes of small to middle market lenders, advisors,and financial entities. The policy is written on a rated paper through Lloyd’s and provides limits up to $5 million, with defense costs inside limits. Cover-age is available as a duty to defend policy.

In a sense, Doherty sees the lenders BRP targets with its miscellaneous professional liability product as an underserved market. “Underwriters tend to focus on banks and venture capital funds,” she explains. “They go for the traditional lending institutions and prefer larger lenders that can take a retention of $100,000 or more and that generate higher premiums.”

Given those circumstances, Doherty says, “We saw an opportunity to pursue smaller organizations with a different approach. We can tailor the coverage to meet each insured’s needs, whether it’s providing lending, advisory, or audit services. The product has a lot of flexibility, and it’s geared toward middle market firms that can assume a $25,000 or $50,000 deductible.”

“As specialists in the small to mid-sized lender market, we try not to ‘box underwrite,’” Cisternino says. “We try to understand the story behind what the firm is doing. Particularly with a high-risk applicant, we often hold conference calls with our broker partners so we can underwrite the account carefully.”